Hopefully, the other interviews have helped you realize that Alpha is the best thing ever. But just in case you haven’t been convinced to apply or donate, I have another interview for you. This one gave me all sorts of warm and fuzzy missing-Alpha feelings. 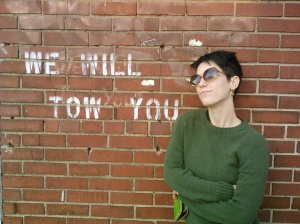 Lara Donnelly is a 2007/2008 alum of Alpha and attended the Clarion USCD workshop in 2012. She is the latest of many Alphans to win the Dell Award (go tweet a congrats at her!). Her genres of interest are historical fantasy, fantasy of manners, urban fantasy, dark fairy tales, and there was this one time she wrote a sci-fi story.

Why did you decide to apply to Alpha?

I decided to apply to Alpha when Holly Black mentioned it on her LiveJournal. I was and still am a massive, slobbering Holly Black fangirl (she taught at Clarion USCD last year, which is why I applied).

I can’t remember exactly, but I think I had just missed the 2006 application date. I decided I would work all summer to pay for the workshop if I got in the next summer. And I did, and had an incredible time. I was asked back in 2008 to teach as a beta, a peer instructor.

Can you give potential future Alphans an idea of what they should expect at Alpha?

At Alpha, do not expect to sleep. But DO expect to get into the best and weirdest conversations you’ve ever had, with people who meet you right on your nerdy, book-loving level. You will not have to explain to these people the anatomy of a hippogriff, or the concept of the singularity. You can get right down to arguing about whether androids do or do not dream of electric sheep.

Expect to work hard. You have a week to write a polished story, and to read and critique four or five other stories, while you attend lectures (and, in the case of betas, GIVE lectures), travel to readings, and chat with staff and visiting writers. One week is NOT enough time, and you still have to cram it all in. Remember what I said about not sleeping?

But expect, most of all, to sink into a warm, welcoming community of people just like you. With your classmates around you, I can guarantee you will actually ENJOY sinking into the insanity.

How does Alpha compare to other writing instruction that you’ve had?

Alpha taught me more about writing and workshopping than four years of college classes, and I think it had a lot to do with the community at the workshop. I had some wonderful professors in college, but at Alpha, every student is driven and enthusiastic. They are all incredibly well-read, and they are already coming into their own as writers. I read stories in senior-level creative writing classes that would not have passed muster as Alpha application stories. These students are pros.

It was at Alpha that I first heard about Clarion, from staff member Thomas Seay. I heard more about it from alumna Sarah Miller, who studied at Clarion with Neil Gaiman. Clarion is widely regarded as a proving ground for speculative fiction authors, one of the best and oldest speculative writing workshops in the country. And having attended it, I can say Alpha is on a level with Clarion in terms of the workshop intensity and the enthusiasm, and focus of the students. If you sliced a week out of Clarion, you’d have Alpha.

If you could give any advice to young writers going into Alpha, what would it be?

If I could give any advice to Alpha-bound writers, I’d say brush up on your frisbee skills. I’d also say, this workshop is incredibly important, if you plan to pursue writing. Keep in contact with the people you meet at Alpha. They are the beginning of a network that you will absolutely need and use as you move through the writing world.

There’s a rich Alpha alumni community doing amazing things: signing with agents, publishing novels, winning awards…not to mention giving each other some stringent, constructive critique on all sorts of manuscripts. Alphans don’t pull punches when they read your stories.

How has Alpha continued to impact your life since attending?

Alpha got me to my first con: Confluence, in Pittsburgh. And it got me to come back to that con even when I wasn’t a student. And it helped me place in the Dell Magazine Awards four times, and finally win a fifth. And those awards got me to the International Conference for the Fantastic in the Arts (along with a pretty astonishing number of other Alphans who have placed and won over the years), where I met authors and editors and academics who I now consider friends and nodes in that all-important network. Alpha is the reason I applied to Clarion, which was one of the greatest experiences of my life.

The Alpha alumni community is a constant source of support, both for writing endeavors and personal difficulties. Problem with a plot hole? Email an Alphan. Problem with a relationship? Kumquat (kumquat, by the way, is the Alphan way of saying “ditto”).

Alpha is like the big bang: a short, intense experience, from which an observer can trace every aspect of my writing career.